Skip to content
Posted in Uncategorized By Adam LevyPosted on June 7, 2022 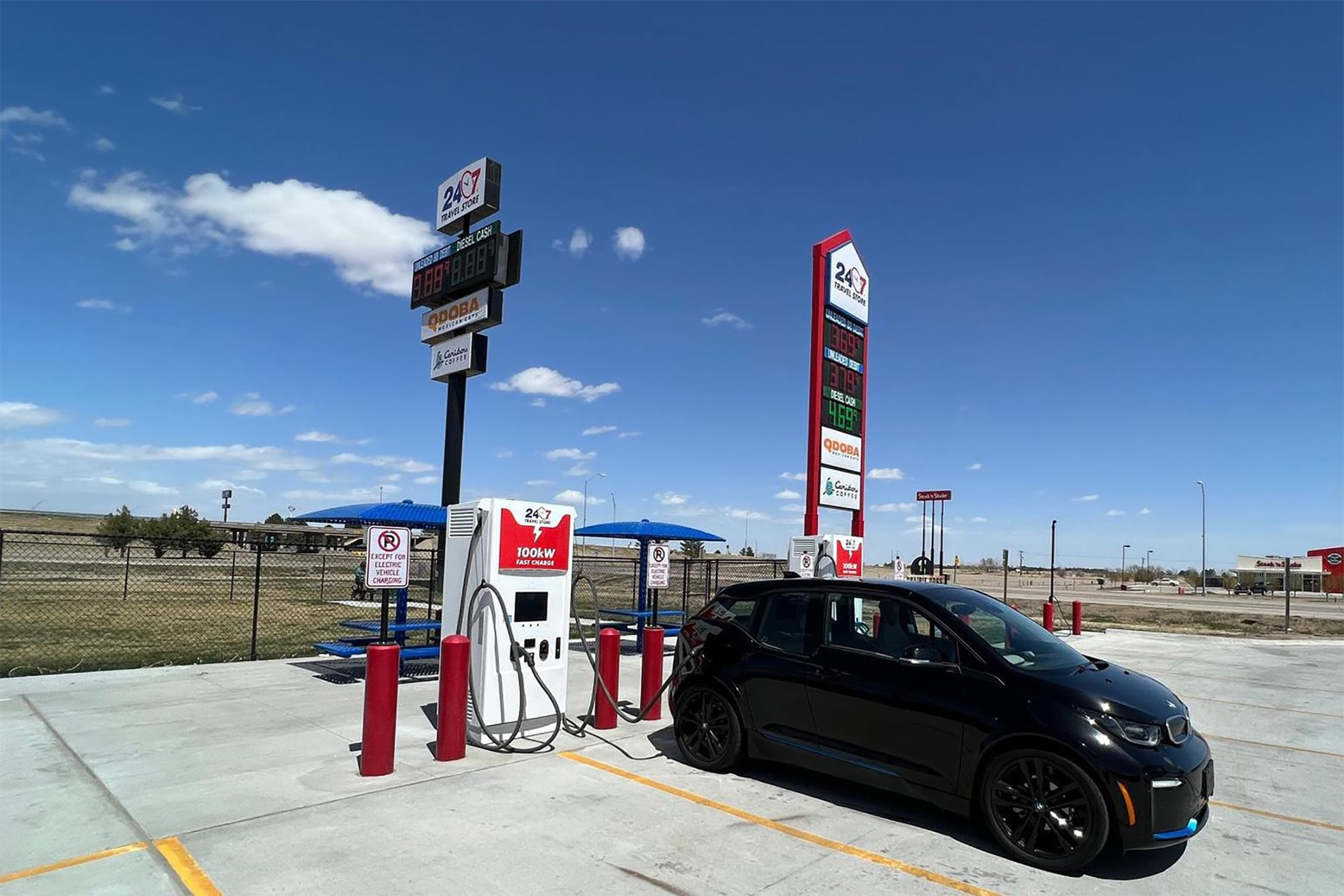 Mark Augustine believes the day is coming when electric vehicles will be as common as gasoline-powered Ford Mustangs or Toyota Corollas.

He wants his 24/7 Travel Stores, a convenience chain that sells gas, to be ready.

Augustine, president of 24/7 Travel Stores parent company Triplett Inc., installed EV charging stations last year at two Kansas locations as a test, in the cities of Goodland and McPherson. The equipment is expensive and there are few EVs in the region, “but things change faster than you think,” he said.

“I felt like we needed to learn about how the customer experiences it and how you get payment for it,” Augustine said.

Plenty more executives of convenience stores that sell gasoline are grappling with the same issues. The auto industry is betting that electric cars are going to be the future of transportation, and gas stations want to keep those motorists as customers, even if they need electricity instead of gasoline. Meanwhile, rising gas prices are leading many motorists to question the value of gasoline-powered cars.

These convenience store owners also want to sell soft drinks and snacks to motorists while their EVs are refueling, the same way they do when motorists are fueling up with gas. They’re wrestling with decisions about whether to dedicate parking spots to EV chargers or buy more land to make room for them.

But EVs are only a tiny fraction of automobiles in the United States and it may be years before they become commonplace, according to industry professionals. Areas like the Great Plains of Kansas, where 24/7 Travel Stores operates, may be even slower to adopt EVs than the rest of the United States, Augustine said.

“Most people drive pickup trucks,” he said. “You don’t see a lot of Teslas around here.”

24/7 operates 10 locations in Kansas, mostly just off Interstate 70 exit ramps. Kansas had 1,017 EV charging stations last year, according to the National Association of Realtors. California had the most with 41,225 and Alaska was last with 94.

Less than 1% of all U.S. vehicles are electric powered, but that’s starting to change, according to S&P Global. The number of battery and hybrid electric cars sold in the United States doubled from 2020 to 2021. EV new car sales in the U.S. could reach 30% of all new car sales by 2030, according to research firm EVAdoption.

Automakers and battery manufacturers are rushing to build new factories to support the EV push, according to economic development consulting firm Conway Data. Ford and SK Battery America partnered to invest $11.4 billion to construct two plants in Kentucky and Tennessee to make electric vehicles and batteries. Rivian will begin construction this summer on a $5 billion factory in Georgia for its electric trucks, SUVs and delivery vans. Toyota has proposed a $1.3 billion EV battery plant in North Carolina.

However, EV charging stations are expensive to install and maintain. And they can require the reconfiguration of a gas station’s real estate footprint.

The retail gas and convenience store industry is taking it slow to adapt even though federal, state and local tax credits are available to businesses that install chargers.

Wawa partnered with charging manufacturer EVGo this year to install stations at some of its locations, including one at 5231 Brook Road in Richmond, Virginia, but most Wawa stores don’t have them. Buc-ee’s is installing 26 Tesla charging stations at stores in seven states. Kum & Go has put a handful of chargers at locations in Colorado. MPhase Technologies announced May 25 that it will install its EV charging network at 11 BP, Shell and Sunoco gas stations in Virginia. 7-Eleven plans to add 500 charging ports at 250 stores, or 2.7% of its 9,413 locations by the end of this year, though it has not yet identified the locations. And Circle K’s parent company, Alimentation Couche-Tard, will install EV chargers at 200 locations in the U.S. and Canada, or about 2% of its stores in those countries, by 2024. The first of the new EV stations opened in May at a Circle K in Rock Hill, South Carolina.